Mother nature kept threatening to spoil the party – there were flash flood warnings both Friday night and Saturday – but even mother nature could not stand to stop the music. There were a few drizzles periodically on those days, but the deluges promised in local weather reports never materialized. These weather concerns slightly changed the lineup of the annual WXPN XPoNential Fest at Wiggins Park and the BB&T Pavilion in Camden, NJ – just across the Delaware River from the sprawling skyline of Philadelphia – but for the most part, everything went off without a hitch.

Two bands were moved inside on Friday. A few acts were cancelled (sorry, Hurry and Swift Technique!) or postponed and moved to other times – leaving the listeners with the Sophie’s choice of whether to check out classic soul man Charles Bradley & His Extraordinaires or the terrific newfangled soul group The Suffers, whose sets coincided on Saturday evening. At least the Suffers had another earlier set, so the cut wasn’t that deep.

The music continued to shine, despite the bleakly overcast skies. (Actually, this turned out to be a pleasant change, keeping the temperature much more manageable than previous years’ surface-of-the-sun midday heat until Sunday, when the heat started getting more oppressive.) The show went on, and on, and on, with a little something for everyone. XPoNential Fest, like the radio station which presents it, is a smorgasbord of styles, ages, genres, instruments, pulses and even languages. Rock, pop, soul, jazz, blues, worldbeat, hip hop, country, folk; all were present and accounted for.

How many festivals can you go to and see both the Drive-By Truckers and David Bromberg’s Quintet? Wilco and Preservation Hall Jazz Band? Rhiannon Givens and Conor Oberst? Spoon and Foxygen? Joseph and Hooray for the Riff-Raff? Well, okay, lots of fests these days have insanely eclectic line-ups, but it still makes this a wonderfully fun and diverse musical experience.

As said before, the threatening forecasts led to most of Friday’s sets being moved from Wiggins Park – three acts played at the Marina Stage – Pinegrove, the Arkells and Brownout – but all the sets on the larger River Stage were cancelled or moved to the smaller Marina Stage, or in the case of Angel Olsen and Offa Rex moved next door to the (mostly) indoor shed BB&T Pavilion, making for only eight acts on the first day.

Offa Rex was one of the Friday highlights. It is a side project of popular band The Decemberists with the addition of gorgeous-voiced folk vocalist Olivia Charney, which specializes in doing covers of old British folk songs with an indie-rock chaser. In another festival, this might feel like a weird sidetrack, but here it was just another sweet and intriguing musical avenue to explore. Charney handled lead vocals on most of these long-forgotten classics like the ethereal “Dark-Eyed Sailor” and even accompanied herself on solo harmonium on the traditional favorite “Bonnie May.” The tempo was raised periodically with songs like Richard Thompson’s “To Make You Stay” and a crunching take on another public domain trad classic, “Sheepcock and Black Dog.”

Charney also soared with a plaintive, contemplative version of Ewan MacColl’s classic “The First Time Ever I Saw Your Face,” which years later became a soul classic when covered by Roberta Flack. The awestruck, sweet vocals (her voice is a potent meld of Kate Bush and Natalie Merchant) and the Decemberists’ subtle instrumentation reinvented a song that we have all heard many, many times. And speaking of reinvention, the band also pulled out a delicately massaged version of The Decemberists’ “Rox in the Box,” to the glee of fans. That band’s leader Colin Meloy also took lead on a stunning cover of the 1844 pro-union protest ballad “Blackleg Miner.”

The tempo was turned up significantly for the next act, local faves Hop Along, which stormed in on the raspy, caterwauling rock vocals of lead vocalist Francis Quinlan.

Conor Oberst, the artist formerly known as Bright Eyes, was the next-to-last act on Friday, and frankly he scorched the place. Of course, anyone who remembers Bright Eyes’ anti-Bush political anthem “When the President Talks to God” would not be surprised that the singer would take on the short-fingered vulgarian currently living in the White House. Oberst gave a heated rant about Trump, calling him an “admitted sexually assaulting Russian oligarchy charlatan” and a “fucking piece of shit” before tearing into a passionate version of his 2009 protest song “Roosevelt Room.”

Wilco, great as they are, had a hard time following that up, but they put together a solid, workmanlike traipse through their back catalogue. Bolting out of the gates with a powerful “Random Name Generator,” Jeff Tweedy and the boys did a solid “greatest almost-hits” set – because only in a much better alternate universe has Wilco ever really had any hits, per se. But what they have had was a strong bunch of tunes derived from decades of touring and jamming, and the band rocked the festival with such crowd favorites as “If I Ever Was a Child,” “War on War” and “I’m Always in Love.”

The next day was full of pleasant surprises and old favorites. Saturday’s lineup was a long and rewarding journey for fans, starting with the space-age jazz of Xenia Rubinos and stretching through a series of genres and tempos. Foxygen went wild with their good-natured bombast, and Dave Hause and the Mermaid blew the place away with their good-time rock.

However, the party really started when legendary Nola collective The Preservation Hall Jazz Band brought their brass and their swing to the waterfront. The group had been on last year’s schedule, but their performance was scuttled when the skies opened up a few minutes into their set. The band more than made up for it this year, with a gumbo of bracing jazz instrumentals that brought the crowds to a boil. A good-time music City times was had by all. And, they also came back later in the day to back up Saturday night headliner Amos Lee.

Rhiannon Giddens and her family collective brought the roof down (okay, there wasn’t really a roof) on the river stage soon after. Doing an adventurous mini-set which combined jazz-infused originals with quirky covers of Odetta, Patsy Cline and The Staples Singers, Giddens and her well-chosen eclectic backing band (including her husband) traversed the world-beat of “Following the North Star” and the bluesy, jazzy gorgeousness of “The Love We Almost Had.” She wound everything down (and up) with an impassioned cover of The Staple Singers’ protest song “Freedom Highway” – a slightly subtler protest of the Trump era than Oberst’s passionate speech the night before – but make no mistake, it was still a political call to arms.

Then the Screaming Eagle of Soul himself, Charles Bradley and his high-flying Extraordinaires, showed the kids how to do it, doing a screeching, soothing, searing, evangelical set of old-school soul. Moving indoors to the BB&T Pavilion, XPoNential Fest fave Chicano Batman (who also played two slots in last year’s proceedings) brought the barrio to Camden, doing a terrific set of soulful party rock.

Acclaimed Austin rockers Spoon also rocked the joint, opening with the hip-hop inflected “Do I Have to Talk You into It” and then traipsing through their eclectic back catalogue. Front man Britt Daniels grooved to “I Turn on My Camera,” the jamming “Don’t Make Me a Target” and the lovably odd “The Beast and the Dragon, Adored.”

Headliner Amos Lee cleaned things up, with help of the Preservation Hall Jazz Band. He started up with his own band, though, playing such faves as “Bottom of the Barrel,” “Jesus” and “Keep it Loose, Keep it Tight.” He then invited up his first guest star, old friend and Philly soul man Mutlu, and the two of them tore through a slinky covers medley of Lee’s “Won’t Let Me Go,” Hall and Oates’ “Sara Smile” and Ginuine’s “Pony.” Then the Preservation Hall guys joined in, giving their own special stamp to Lee’s “Cup of Sorrow” and “Sweet Pea.” Everything wound down with a monstrously funky cover of Allen Toussaint’s “Yes We Can Can.”

The heat made a return engagement for Sunday’s festivities, but the bands were just as hot as the weather. Early faves included the sweet and stunning jazzy stylings of Adia Victoria and a fun and frisky set from sister-group Joseph.

In fact, for a large portion of Sunday’s proceedings, the women took over. A whole block of talented female-led bands spread through the afternoon, sharing their good vibes and their smart lyrics. The politics of the day also raised its head again too. As Hurray for the Riff Raff singer Alynda Segarra explained to the excited crowd, “This is resistance music.” Of Hurray for the Riff Raff’s resistance music, highlights were “Living in the City,” “Rican Beach,” “Hungry Ghost” and a surprisingly cool cover of Bruce Springsteen’s “Dancing in the Dark.”

Even blues-rock man David Bromberg joined in on the Trump-baiting (which tended to be a running theme for the weekend). “There must be 1.5 million people here,” he said puckishly, “In fact, this is the biggest festival crowd in history,” teasing a famous Sean Spicer press conference. He didn’t punctuate it with the “Period!” but everyone knew what he was talking about. Then he suggested that the tweets were a secret code, which when solved led to his song. And the dude just smoked the place with a version of his fave “Sharon.”

The Record Company graduated from last year’s early afternoon river stage slot to the top three of the night, doing a fun and friendly rocking set. Davy Knowles also showed himself to be an up and comer, mixing in original favorites with an adventurous cover of David Crosby’s Vietnam-era protest song “Almost Cut My Hair.”

Reunited 80s faves The Dream Syndicate had a self-described “freak out in broad daylight” with a career spanning set, which included leader Steve Wynn doing exemplary versions of “Halloween,” “Out of My Head” and a cover of Blind Lemon Jefferson’s “Make Sure That My Grave is Kept Clean.”

The weekend closed out with perhaps the most overtly political band on the lineup, a drive-by enlightening by the Drive-By Truckers. Complete with a Black Lives Matter sign on the stage, leader Patterson Hood said it was not about left or right, or black or white, it was all about human dignity. When they weren’t preaching to the happily converted, the guys did a smoking set which covered such faves as “Gravity’s Gone,” “What It Means,” “Putting People on the Moon” and a cover of John Lennon’s “Gimme Some Truth.”

It was a weekend of fun, music, politics and no rain. What’s not to like?

Scroll through festival pictures below! 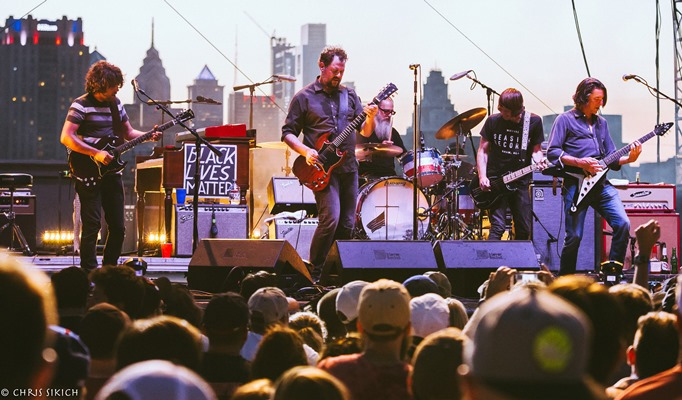 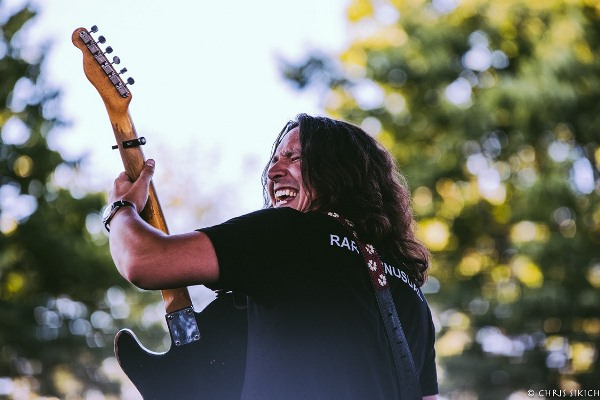 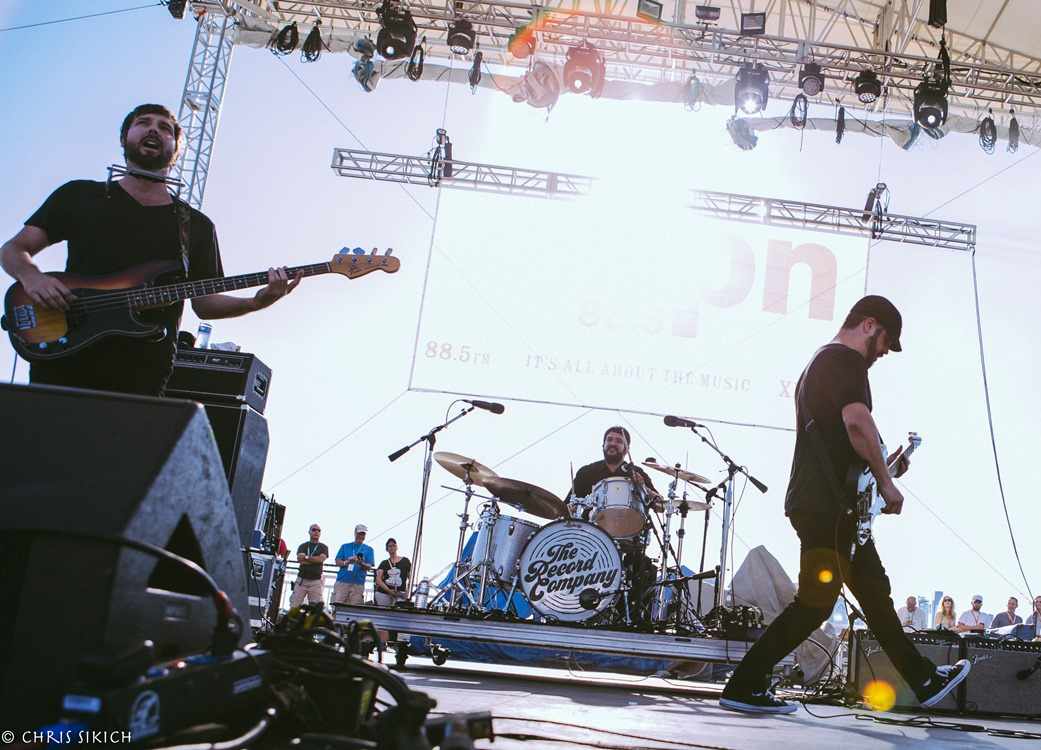 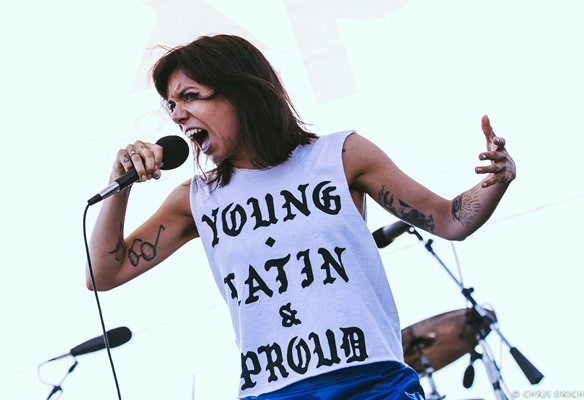 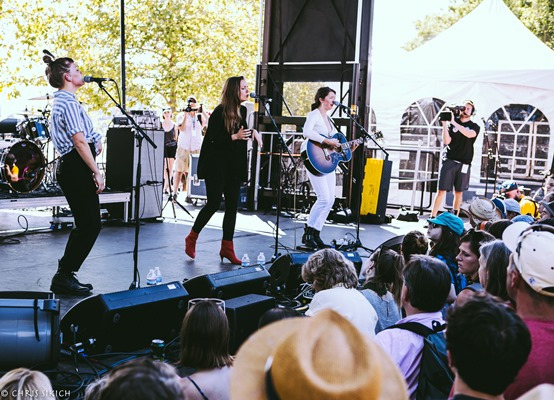 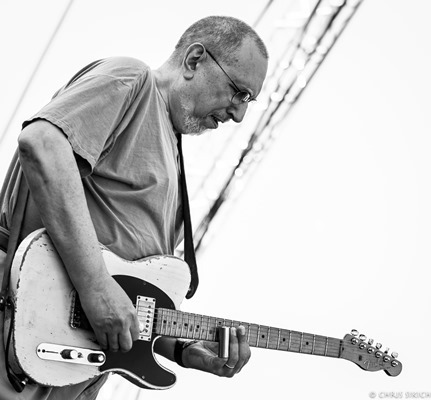 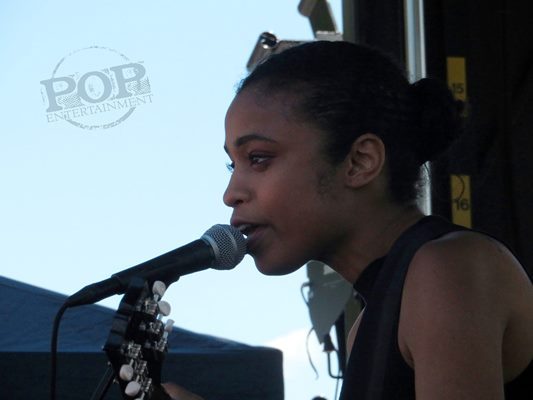 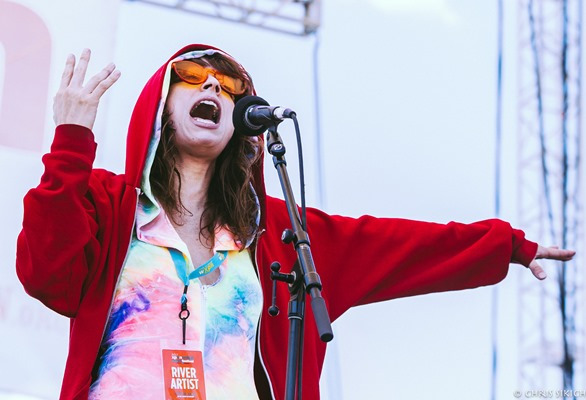 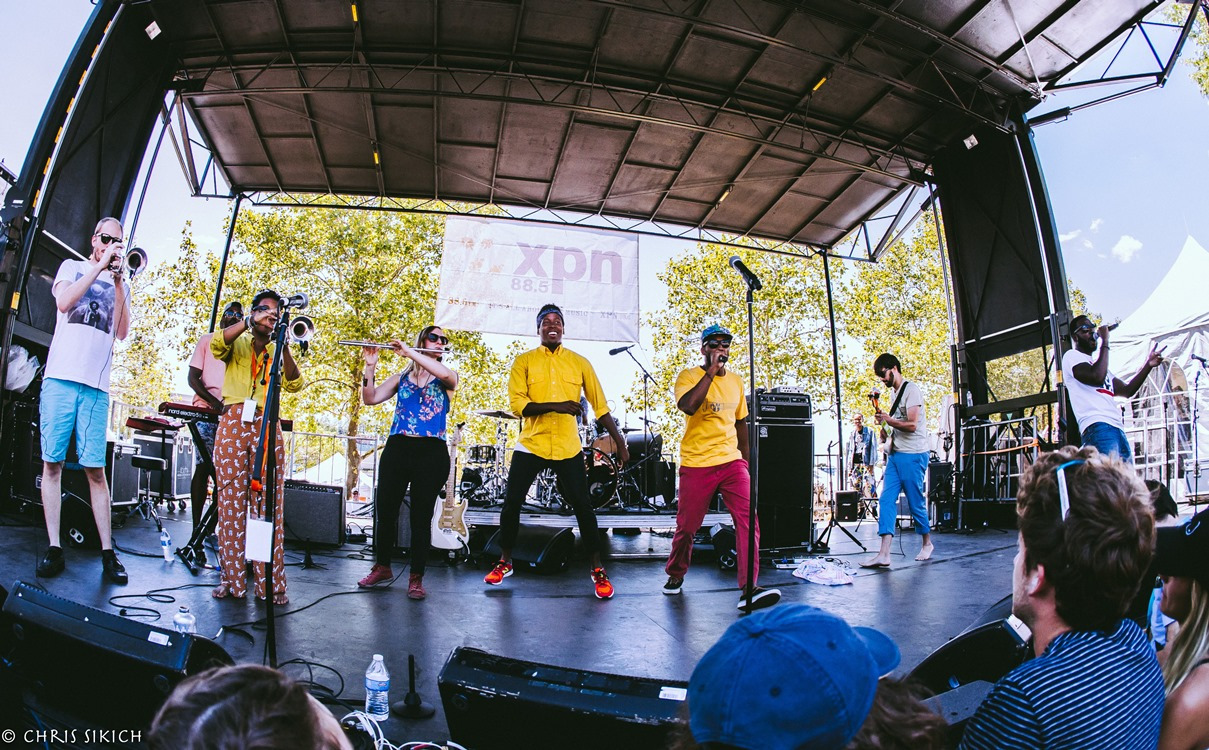 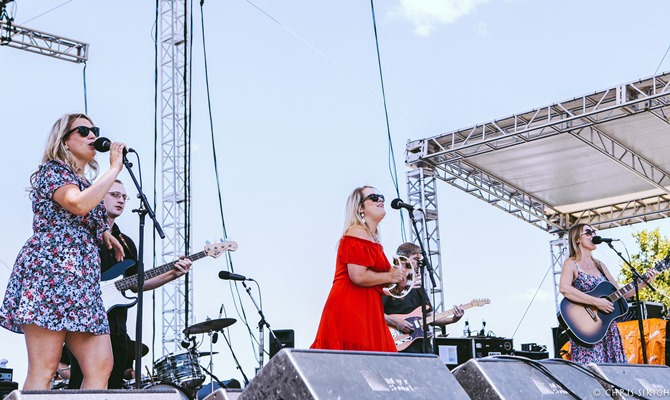 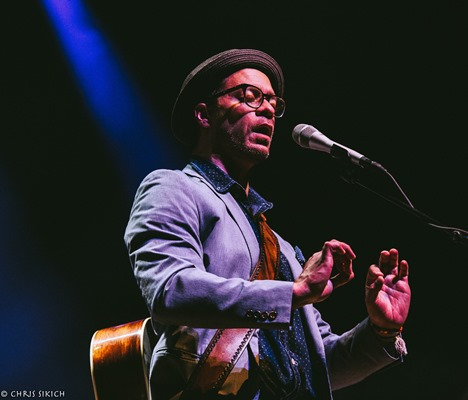 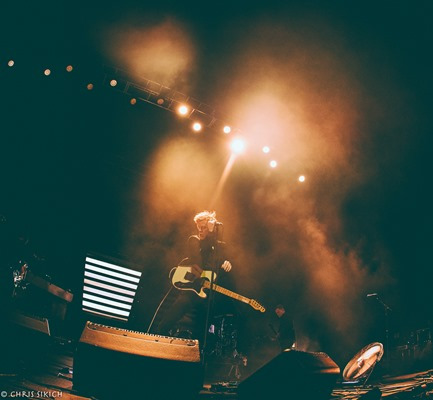 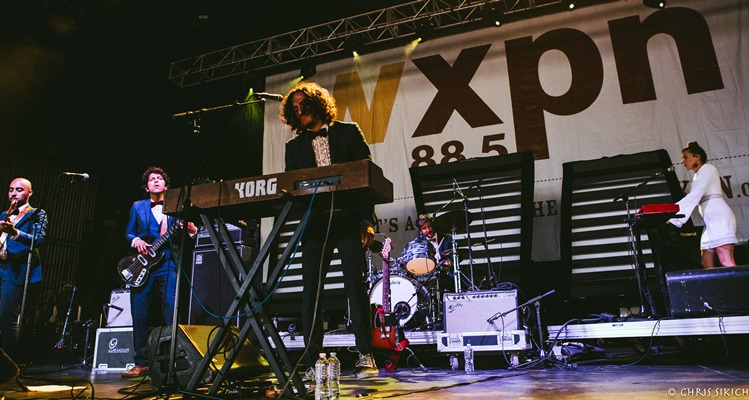 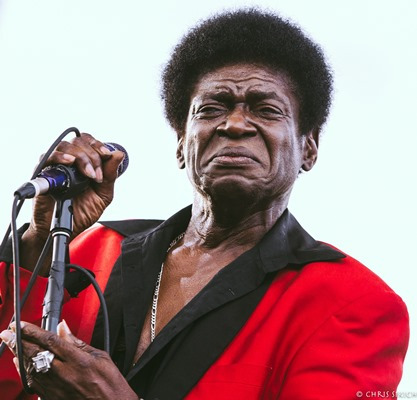 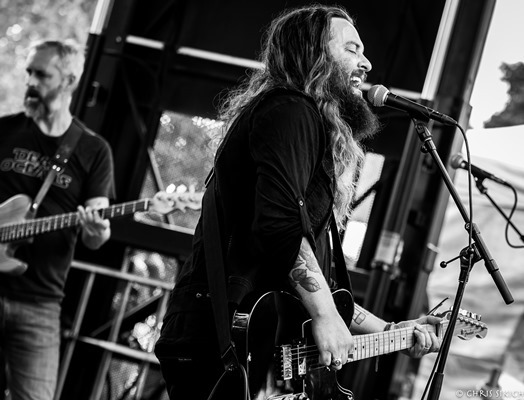 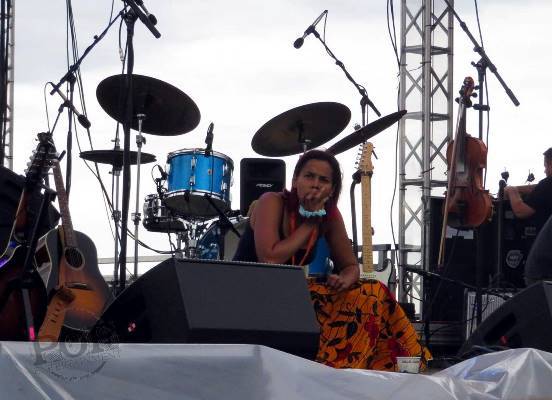 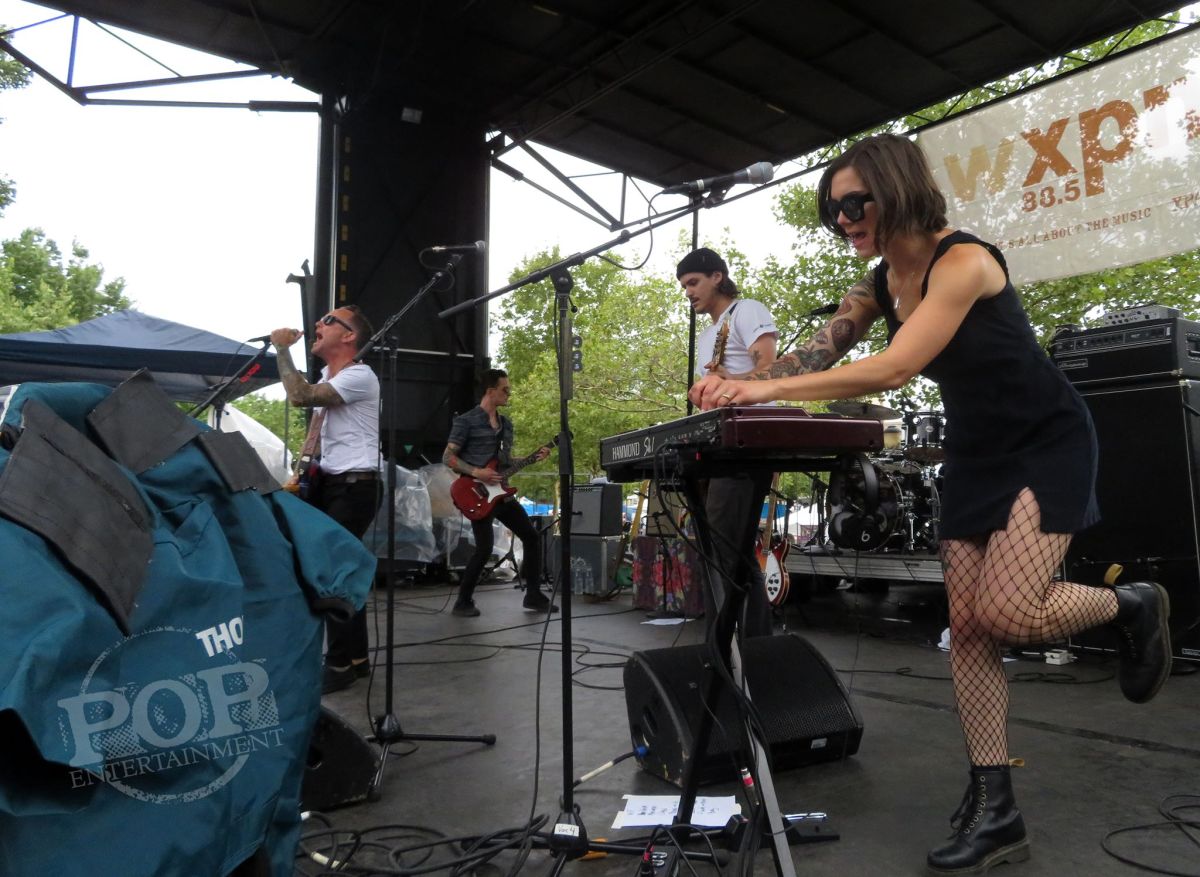 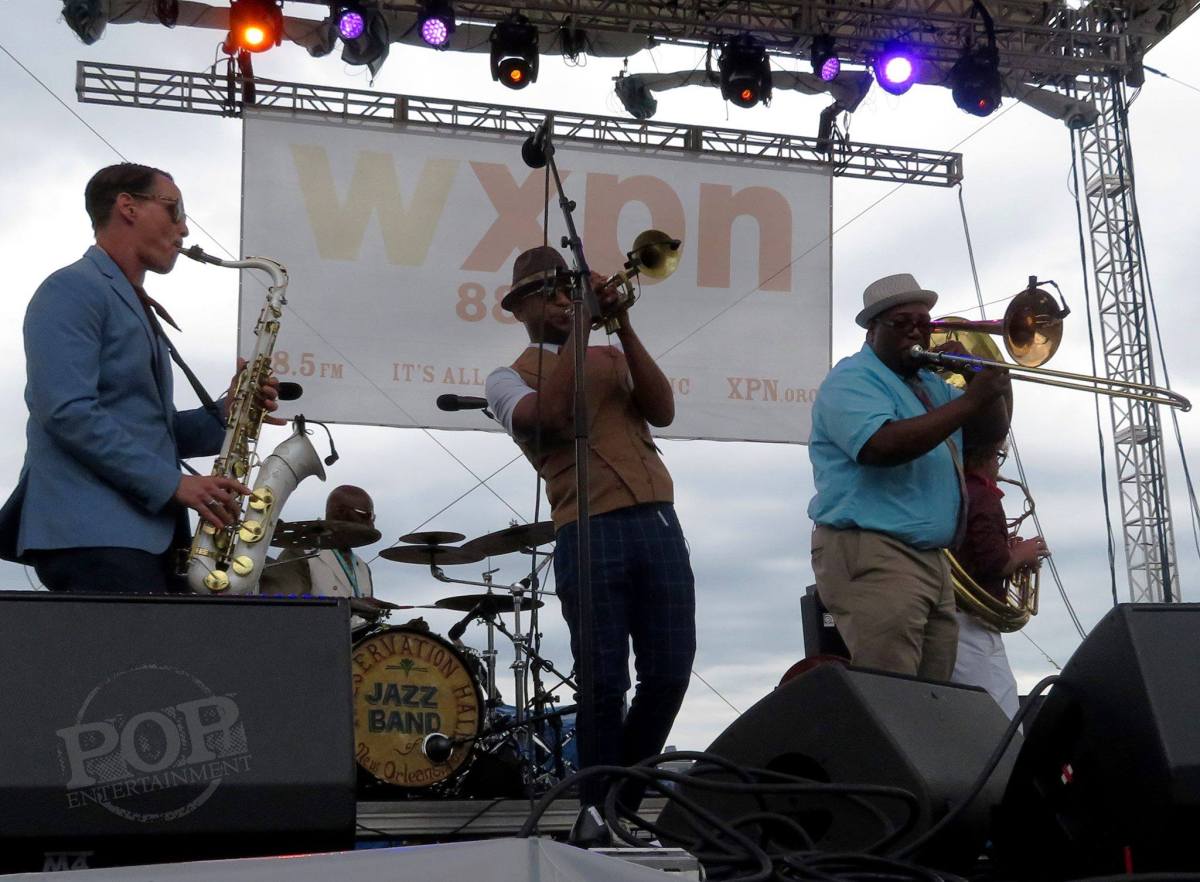 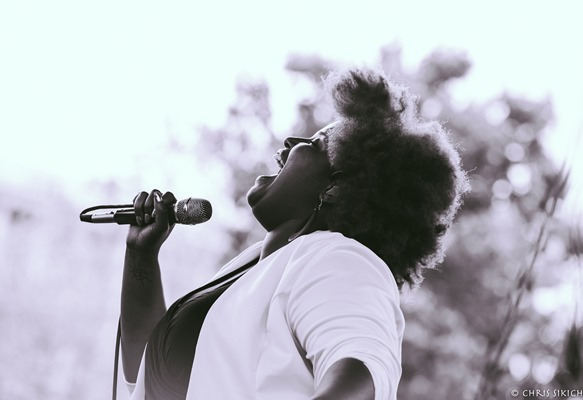 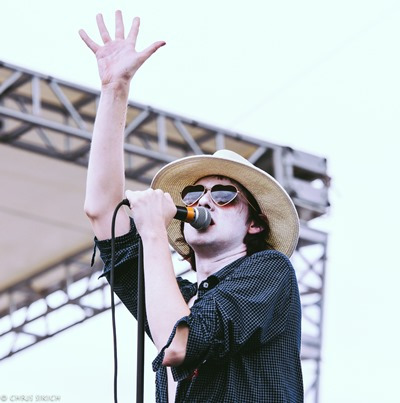 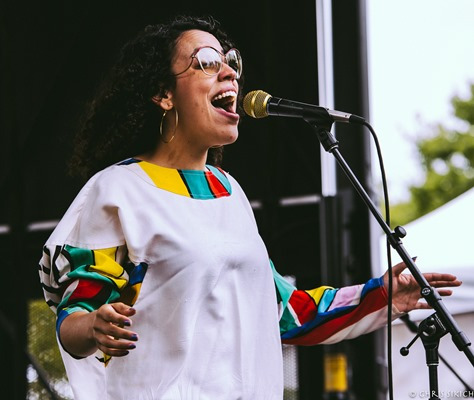 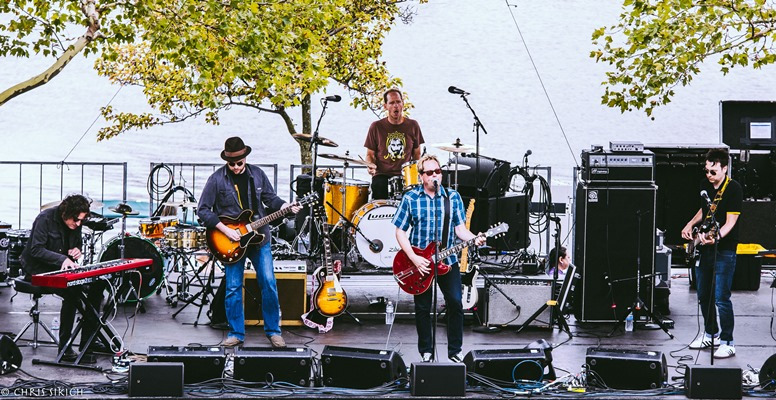 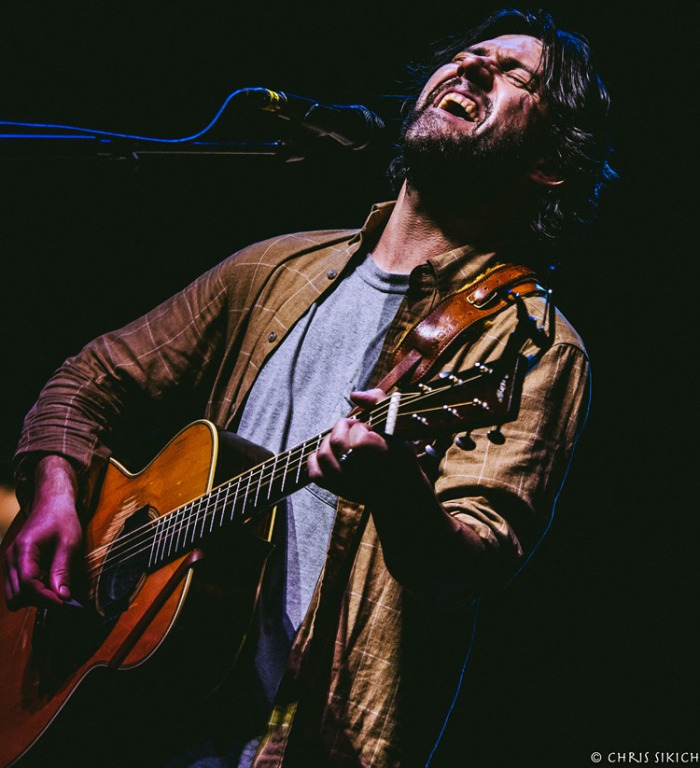 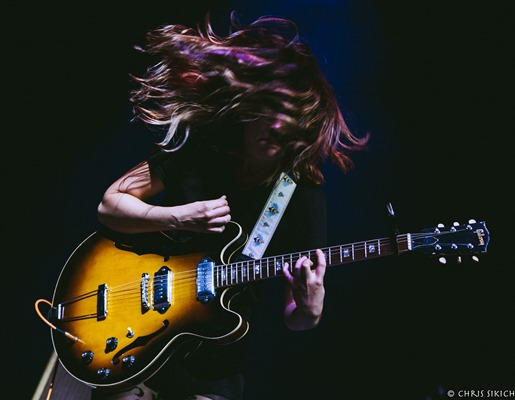 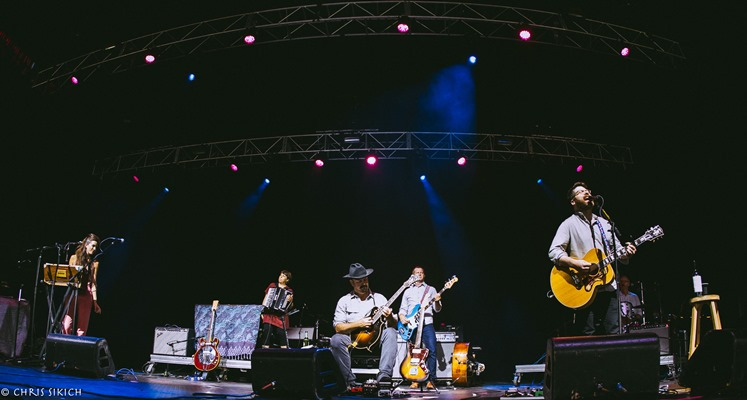 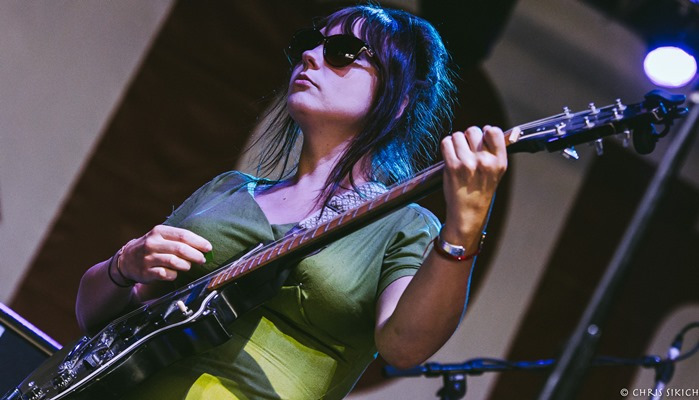 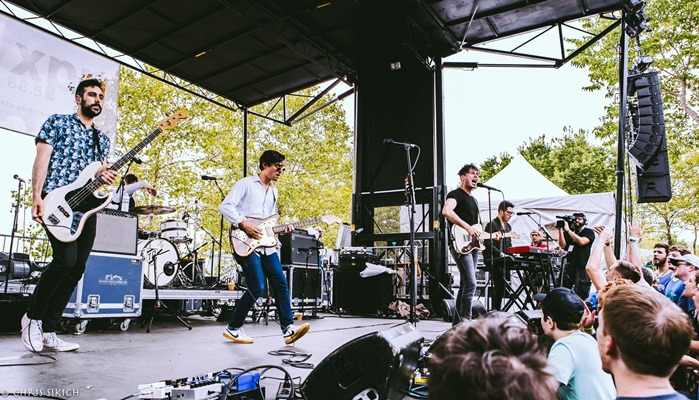 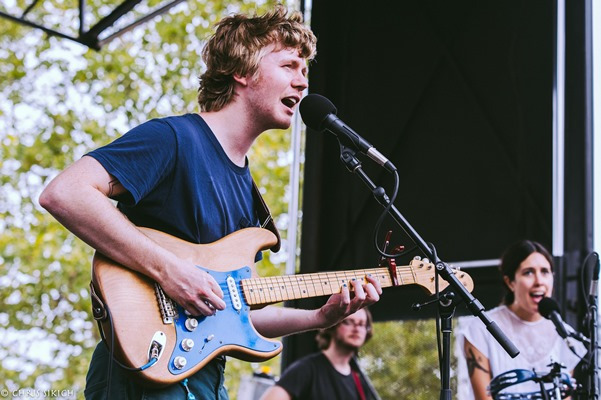 I Am Woman (A PopEntertainment.com Movie Review)